When I was 7 years old me & my family took a vacation to the beach. It’s one of the few we’ve had.  I remember playing Monopoly on a coffee table & a wooden bridge leading to the beach. I remember my older sister’s face with her cute oval shaped glasses. I remember a Barney Goes to the Zoo VCR tape me & my little brother watched. I remember walking into the vacation house living room & seeing my parents staring at the news. The TV only showed a building I’d never seen before. It only showed fire & smoke. I remember it was a really bad thing that happened.
That’s what I remember of September 11th, 2001.

We use to have neighbors that lived across the street from us. Mr. & Mrs. Leonard. We didn’t see them much, because they were older, but they were the sweetest couple. Mrs. Leonard got real sick & passed away a few years ago. Mr. Leonard lived in that home by himself after that. One day I came home from my Sophomore year of college & there were cop cars & an ambulance in our col-de-sac. Mr. Leonard made the decision his life wasn’t worth living.
That’s what I remember about Mr. Leonard.

Today in my school’s courtyard, there were some older men with large signs. They said: “Follow Jesus. Love God. Hate Sin.” or “All Homosexuals, drunkards, whore-mongers are hell bound.” These men calmly stood in front of a crowd of students & proclaimed how God hates the sin, therefore the sinner. They continued to paint a picture of a future in hell if you are a sinner. They spoke a great deal on sin. None on grace, love, or redemption. This demonstration was received mostly by laughing & girls taking selfies. There were boys taking their shirt off & writing on their chest “I’m Gay & proud” & others yelling. I walked to class thinking, who heard that they were hated by God? Who went home & thought of nothing but shame & guilt for the life they lead?
That’s what I remember about today.

Each decision, made each of these days, affected others.
19 people deciding to commit suicide for their cause in 2001, killed 2,977 people.
Mr. Leonard didn’t see any other way to end his unhappiness & has left his kids heartbroken.
Today, a few hundred GSU students heard that they were hated unless they follow these men’s instructions.

I thank God I was born in a nation with free speech, & that’s what these men have. They have the right to stand in my school’s courtyard & say whatever they like. These men decide to use the name of God as their driving force behind their cause. They use a “Christian” exterior as a way to disguise the hatred & worthlessness they speak to others. They have no remorse. They only say, “God hates you until you do what we say.”

Mr. Leonard’s life was worth more than deciding there was no future for him. That he couldn’t face another tomorrow.

The students that heard those men today are worth far more than believing they are hated by a God that loves them so much He chases after a relationship with them.

This is a post because I stood in my courtyard today & cried because someone might think they are hated by the God that created them with a purpose. It’s about how much wrong there is & hoping these words can be some good. It’s about me dreaming of a fairy-tale dream where there won’t be lies or hate or lives of any kind being ended.

This is a post hoping you know you’re a rad kid & have an amazing life to lead. Because, the Lord & Savior Jesus Christ died for you. He loves you & wants you. God made you & has plans for you. Tomorrow is always a new day & your worth more than the circumstances your in. 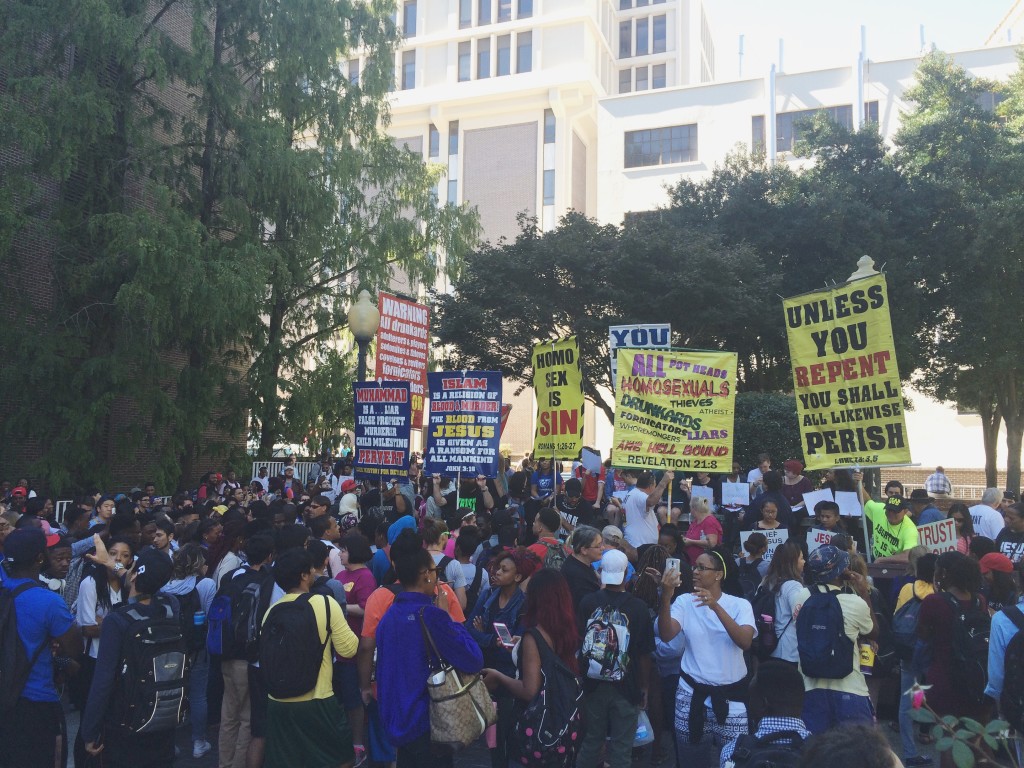